Teamwork makes the dream work. I don't really know where I heard this phrase the first time. I am sure it was some kind of motivational someone or something. I have to say that in my marriage, it is a lot of me "teaming" up with my husband and him doing most of the "work" part. I'm not saying I sit around all day and just do nothing. But my hardworking creative man surely is the one who truly brings my dreams to life. I have some major farm dreams, but for now, all my barn dreams had to come to life on an itty bitty chicken coop. We are still working on the chicken run, but the coop is pretty close to done. When Josh suggested we paint the coop with an American Flag, I got super excited! Even when the coop was done and I thought it looked really good with just the raw lumber, I knew I still had to paint it to look like an American flag. (Don't bother counting--there aren't 50 stars.)
What blows me away the most is that we have spent very little money on this coop. Josh has make it out of almost 100% recycled materials. He truly is a master upcycler. I LOVE this about him. (Even if the ability to make something out of junk makes it hard to throw things away sometimes ha ha ha!) 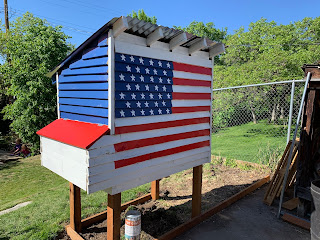 Then for Mother's Day I was gifted this cute solar lamp. I have a thing with farm lights. Where I grew up there wasn't such thing as street lamps. I often would wake up and go walking early in the morning or catch the bus before the sun came up. The only light that shone above the houses in my neighborhood was a house that had a barn light (very similar to a street lamp, but for their out building.) 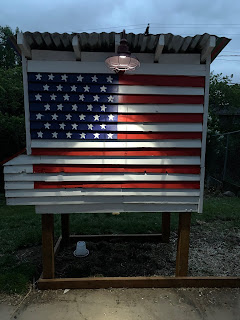 When I was on my mission I remember a lot of really dark mornings in Wyoming during the winter. I remember loving seeing the barn lights on those dark mornings and feeling such a "home" feeling.

I am a "country girl" through and through. It is amazing that it has taken me until my 40's to realize how true this is for me. I never would have denied it, but now I know that it is a part of me that won't go away. I don't want it to go away. "I'm from the country and I like it that way."
Posted by Tiffany at 2:14 PM