What a girl can learn in 86 hours!


The dry hurricane of 2011 is how I will lovingly refer to the storm that came upon us late Wednesday night/early Thursday morning. The winds were over 100 mph as they rolled down the Wasatch Range and into the valley. They flicked shingles off roofs and toppled 100 year old trees. The winds peeled off siding like a child unwrapping a gift, and sent fences flying like kites. In some instances, it lifted corners of roofs off of houses and made tresses hover above the home they were designed to protect. Electric poles toppled like dominoes, sending sparks that resembled fireworks across the sky, and left the east part of a county in the dark.
The electricity flickered through the night, and by the way the winds were howling, when it turned off at 6:30 am Thursday morning, I knew it wouldn’t be for only a moment. I did expect it to come back on before preschool started at 9am though. I looked out the window that morning after my kids woke up and saw our 50 year old pine swaying like a daisy in the wind. I feared that it might come down on top of our home, so I gathered my kids like a hen gathers her chicks and herded them into the basement. I was so thankful that I had been inspired to stock up on candles at the local thrift store the weekend before. We ate cheerios by candle light and waited out the storm. The storm didn’t stop by 9:00 or 10:00—it wasn’t until 12:00 that I finally felt safe enough to emerge from the basement.
I first noticed the pine tree across the road that toppled and crushed the fence of the neighbor. I had no clue of the destruction that had spent the communities around me. I was grateful for my gas stove and cooked up some grilled cheese for my kids. We played Chutes and Ladders and enjoyed the day. The battery in my phone was going so I decided to take a drive so I could charge it in my car. It was also getting very cold in my house and I wanted to warm up my children. Josh had been nervous about me building a fire, because he was afraid it would smoke us out and then we would really be in trouble.  During the drive I realized the damage that this storm really had done and realized that it might be a long while before we got power back on. I wasn’t prepared for it taking 3 ½ days though!
I did end up making a fire, (and my skills are so good that there was no smoking us out—credit given to girls camp, and mostly my Thompson Falls days in MT) and we are fortunate enough to have a fireplace insert that heats the basement very efficiently. I was planning on making foil dinners to throw into the fireplace that night but as we drove by Arctic Circle, on our way to pick up the meat, the lighted windows, warm place to run around and the promise of not having to clean up in the dark, lured us to indulge in fast food.
Arctic Circle (a local hamburger chain—with a playground) was one of the few restaurants that had electricity. It was full of other families, just like ours, making a retreat from our cold, dark homes. I noticed several other moms sporting the mom ponytail (you know, you gather your hair and twist it in some type of pony tail without even looking in a mirror or combing your hair first,) and quite a few kids still in their PJs. At one point, someone came in and announced that the Honda mini-van had its door open—and I wasn’t the only one who stood up. Don’t worry, it was mine.
That night we had a slumber party in the basement around the fire and we weren’t cold for a single second. Without TV to watch, a sewing machine to do projects, a computer to blog, we all went to bed around 8pm. Josh got up and went to work the next morning, business as usual for commuters. After we ate cheerios in the dark again, I was getting bored and I felt very isolated. As I looked out the window upstairs, I noticed a group of neighbors hacking away at the tree that had fallen across the street. With four kids in tow, I didn’t feel like I could be of much service. After thinking about it for a little while, I decided that if nothing else we needed to go for a walk.
I only made it across the street. My neighbor’s girls played with my kids and I helped out. It felt so good to be part of the community and working together to help people out. I was very warm physically and emotionally as I worked side by side with neighbors and friends. I was able to lend tools, and provide some service. There is nothing like watching a community come together and support each other. I worked outside as long as I could. By mid-afternoon the twins were ready for a nap and their feet were freezing. I attempted to put them down by the fire, but with the rest of us hanging out, there was no sleep for them. 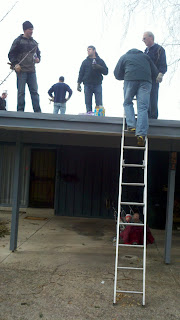 A little while later, my husband called and told me to pack a bag because we were staying at a hotel. I reminded him that we didn’t have the money to do such a thing. If we did that, then our kids wouldn’t have Christmas this year. He then told me that my father-in-law’s boss had paid for a hotel for us for a couple of nights. It was a suite with two bedrooms and a kitchen. It was heaven sent! We were able to check in, get warm, and sleep in nice comfortable beds. I couldn’t believe that someone would do that for us. It was such a blessing. We stayed at the hotel until Sunday morning when we had to check out. By this time we had quite a few friends and family that now had electricity so we just needed to figure out where to go. 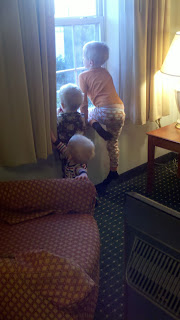 We went to church and our local leaders encouraged everyone to go out and help clean up all of the debris, as another wind storm was expected that night. I dropped my kids off with a friend and went to help my Mother-in-law cook. We cooked over 15 gallons of soup and 250 bread sticks for everyone in need of a warm meal, especially those helping to clean up in the cold. It was amazing to drive through the streets and see literally hundreds of people helping one another. The national guard had been called in and business owners had donated trucks, trailers, dump trucks and employees to help with the clean-up effort.
After the soup dinner, we went back home to gather our things to stay at a neighbor’s and the electricity came back on. It was quite the miracle! There were several things that I learned in my 86 hours without electricity.
1.       People are amazing in times of crisis. It was so wonderful to see how many people were looking out for each other, checking on the elderly, filling the streets to help and making food for each other. Of course, and then there was my father-in-law’s boss who paid hundreds of dollars for us and my in-laws to have a safe, warm place to stay.
2.       D&C 38:30 “If ye are prepared ye shall not fear.” Now this disaster wasn’t as wide spread as some, but I wasn’t afraid for even a moment. I knew we had fuel to keep us warm (our large wood pile) and food for a long, long time. Maybe not a year supply but we had food.
3.       People probably didn’t spend much time living in their basement before the invention of electricity—it got pretty dark down there for most of the day. On that note—I wonder if humans were meant to sleep more in the winter and less in the summer? Before alarms and clocks, I wonder how different sleep patterns were.
4.       Don’t procrastinate! I was kinda (okay—a lot) behind in laundry when the storm hit. That really bit me in the bum big time!
5.       Have more candles than just smelly ones. When you mix lemon loaf, melon, and ginger citrus together—it doesn’t smell yummy. Have quite a few non-scented candles on hand. Make sure that you have some that can be transported when needed (ones in glass jars tend to get hot.)
6.       If your house is in order, you can find things a lot easier. We have been working on this and it made a huge difference. But finding a bag of flour with a flashlight is harder than you would think!
7.       Make sure you have hand crank radio or a battery powered one (with batteries of course.) Luckily we still had cell service, but having to call friends to see what was being reported wasn’t the easiest way to get information.
8.       Have things to do in your 72-hour kit. It gets boring in the dark!
9.       Have your chimney’s checked. I had several friends that couldn’t stay in their home because they didn’t know if their chimney was clean enough to build a fire or not.
10.   I want to have our gas fireplace upstairs converted to a wood burning fireplace that puts out heat! It was warm in the basement but light upstairs. If we could have been warm where there was light, it would have been a little bit easier on us.
11.   Get a battery powered CO2 sensor. There is nothing like going to sleep and wondering if you will all wake-up in the morning.
12.   I *heart* electricity! I am especially thankful for the machines they operate—in this order: My washing machine, my refrigerator, lighting in my basement, the heater, and my oven. (We have a gas stove but not a gas oven . . . hummm??? That might have to change!)
13.   Empathy for natural disaster victims all over the world. This was nothing compared to what some of them go through, but I understand a little bit better.
14.   Most of all, I can weather a storm. I don’t need to be afraid!
Posted by Tiffany at 3:08 PM