I am small town.

I am small town.


I have heard the phrase “she/he is small town.” I think it is meant to be a derogatory term denoting that someone is naive or ignorant. Let me tell you though I am small town.
I grew up in a close-knit small community. We have one High School in my home town and only two middle schools.

We were pretty isolated in the middle of Arizona. Our claim to fame? Home of the world’s oldest rodeo. My oldest friend in the whole world was the rodeo queen—a huge honor. The street we lived on wasn’t paved until I was a senior in high school. Even then, it is just a chip seal—no gutters, sidewalks, or curbs.
Seeing someone go down the street on their horse was almost as common as seeing a car. My parent’s property shares a property line with the Prescott National Forest.


I am Prescott Arizona. After living away for almost half my life, I am still that small town. Half of my life was spent exploring those dirt streets, running away to that forest, and climbing those mountains. You could almost always find my family having breakfast at Goldwater Lake on Memorial or Labor Day. We often went camping in the mountains of Prescott. 4th of July would always find our family lining the streets cheering for the countless horses and spending time at the booths of amazing artists. Every 4th of July I get terribly homesick. We often spent time at “the square” during Christmas. Prescott is “Arizona’s Christmas City.” That is my core. You can take the girl out of the Prescott, but you can never take the Prescott out of the girl. 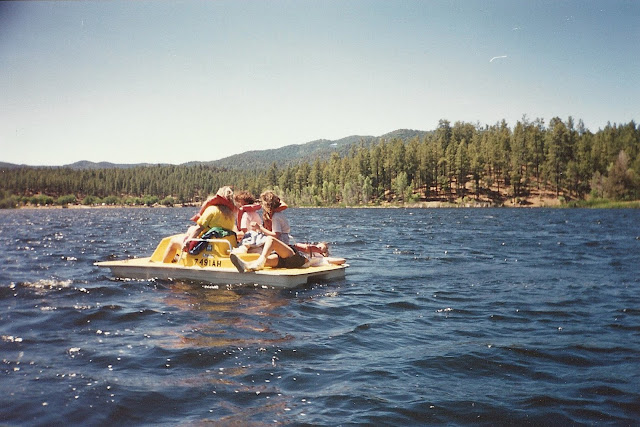 I have amazing parents. They are pillars in the community. Yet this community is a pillar in me. I was raised by my parents, church, teachers, and neighbors. That is small town. I don’t know if everyone feels so attached to their hometown, but I do. Prescott may be “everybody’s hometown” yet it is true for me.

My hometown is mourning today. I am mourning with them. That is small town. 19 firefighters that were stationed in Prescott were killed by a raging fire over a week ago. I didn’t personally know any of them. I did know Andrew Ashcraft’s widow though. My most vivid memories of Juliann were the summer that I tended the kids that lived next door to her. I also grew up with her older brothers. Her dad has worked next door to my dad for 35 years. The Crockett’s are part of the Prescott in me. That is small town.

Would it matter if I didn’t have a personal connection? Would I still be sitting here crying? Probably. I will never forget the fire of 92 where we sat and looked out back, seeing flames shoot up over the mountain. So many of the memories of that fire were brought back when the Doce fire again burned Granite Mountain in late June. Luckily my parents weren’t evacuated, but housed some that were. That brought back memories of the fire of 2002 when my Mom had her knee replaced and I was tending to her and the house for them. We took in evacuees then too.

See wild land firefighters have saved my parent’s home and property before. These type of firefighters were heroes growing up. Becoming a firefighter was what so many of my heroic friends wanted to do when the “grew up.” It reminds us daily that there are heroes all around us.

I want to be a hero. I know I will never be out fighting fires (at least professionally)—but I don’t think we have to in order to be a hero. Juliann said on the today show, “they were heroes in our homes and in our communities.” I know I can be a hero in my home and in my community.

I may live in suburbia now, but I will always be “small town.”

What is small town to me? It is caring about each other. It is mourning with those that mourn. It is loving the children around you like your own--taking a vested interest in them. It is living with a purpose greater than yourself. It is giving of yourself. It is service. It is an overwhelming love of God, Family and Country. That is the example I grew up with in a small town. That is what the building blocks of my soul are.

I am small town.(or at least I strive to be.)

P.S. Check out these links, you will be glad you did!
Deseret News article
Her interview on The Today Show
For baseball lovers
Posted by Tiffany at 12:34 PM