"Let's start at the very beginning--a very good place to start." Josh and I bought our house almost exactly 9 years ago. In fact we got the keys on Memorial day weekend in 2005. We bought the house because we weren't afraid of a challenge, and it had features (like a creek in the back yard) that you just couldn't landscape in. The house has good "bones" and we thought it was the perfect little starter house. (Little did we know that we would have 4 kids and another on the way and STILL be living here!)


We didn't love the millions of bushes in the front yard. The following picturee isn't the greatest, but on the side of the house there were tons of bushes between the fence and house. All along the perimeter of the front yard was lined with bushes and a really pretty rose bush in the middle of the front yard.
We slowly pulled out most of the bushes. Making the yard more open but defiantly more bare. The front yard had dips in the lawn and was kind of a pain to walk on. Clover had invaded.

I had a vision for the yard but I also had four kids in four years and the yard was down on the list. Last spring (2013) I sat outside on the lawn and sketched up my vision of what I wanted my yard to look like. I knew I wanted garden boxes as I felt I would be more successful as a gardener and thought I could grow more food in a smaller amount of space. I had also wanted a pathway up to our door forever. So I showed Josh my vision and he loved it. He also hated the grass and thought it would be better if we ripped out all of the grass and  just started over. So we demoed THE WHOLE THING. We rented a sod cutter and removed all of the grass in the front yard. And started building my garden boxes. Our awesome neighbor came with a skidster and started taking scoopfuls of dirt from the yard and filled most of our garden boxes with the dirt from our yard. I wish I had more pictures from this era of dirt but it wasn't a pretty sight.
I was 100% accurate about the garden boxes. I was a much more successful gardener in my boxes. I still have jars of food on my pantry shelf from last year's harvest. It was a beautiful thing! The garden was that is. The rest of the yard wasn't very pretty. We had a drought, we got busy, and I got sick with my health issues. The rest of the yard didn't get finished. But once it started warming up we hit it with full force this spring.

We had to till the yard quite a few times during this project. Each time Josh would nick the sprinkler line in at least one place. The sprinklers hadn't been buried very deep when they were installed many years ago. There were a lot of trips to home depot to get parts to fix the sprinklers, and a lot of digging to bury them deeper.

(Miracle one)I went to get the sod with my mother-in-law at 9:00am, and they told me they were sold out. The next day was going to be pouring rain all day and I knew we couldn't lay it then. I was frustrated that it was going to take several more days before it was done. He took down my name and number and told me that if he had a cancellation he would call me. About a half an hour later he said that there was a mix up with an order and they had ordered too much. He had enough for my project. I booked it back over there and picked up the sod.

(Miracle 2)Then the yard wasn't quite ready for sod, and the skies were darkening. I was working on it when my mother-in-law showed up and started right in on getting the park strip ready. I don't know why but I am really challenged with a rake. She saved my life and she made the park strip PERFECT!

(Miracle 3)I started in on the main area of the lawn and thought that we still had too much dirt--like maybe 2 wheel barrows full. My dear friend Amy came and started to rake it out. I shoveled and dumped the dirt for a couple of hours.

(Miracle 3)I was wearing out fast and just as I was about to admit defeat, my friend Shannon came walking up the hill carrying a pair of gloves. I almost cried--it felt like a movie when the Calvary comes up over the horizon. It was one woman but it was the Calvary to me! She told me to sit down, and she took over the shoveling and dumping while I rested for a while. Between the both of us, we actually got about 15 more wheelbarrows of dirt out of the front yard. Amy had it smooth and even--picture perfect.

(Miracle 4)Josh was able to get off work a little early--just as all the prep work was done. Shannon had to attend to her family and right after she left (Miracle 5)Michelle came ready to help.


(Miracle 6)My in-laws came and helped with the cutting around sprinklers, and small patches. They were also a HUGE help with the clean up. There was DIRT everywhere!!


Not one of my friends was asked to help. They just came when they knew I needed help. They are true disciples of Christ. True blessings in my life and true friends.

(Miracle 7)Shortly after the above picture was taken, right as we were getting done cleaning up, the first rain drops began to fall. Within an hour it was pouring rain and didn't stop for two days. 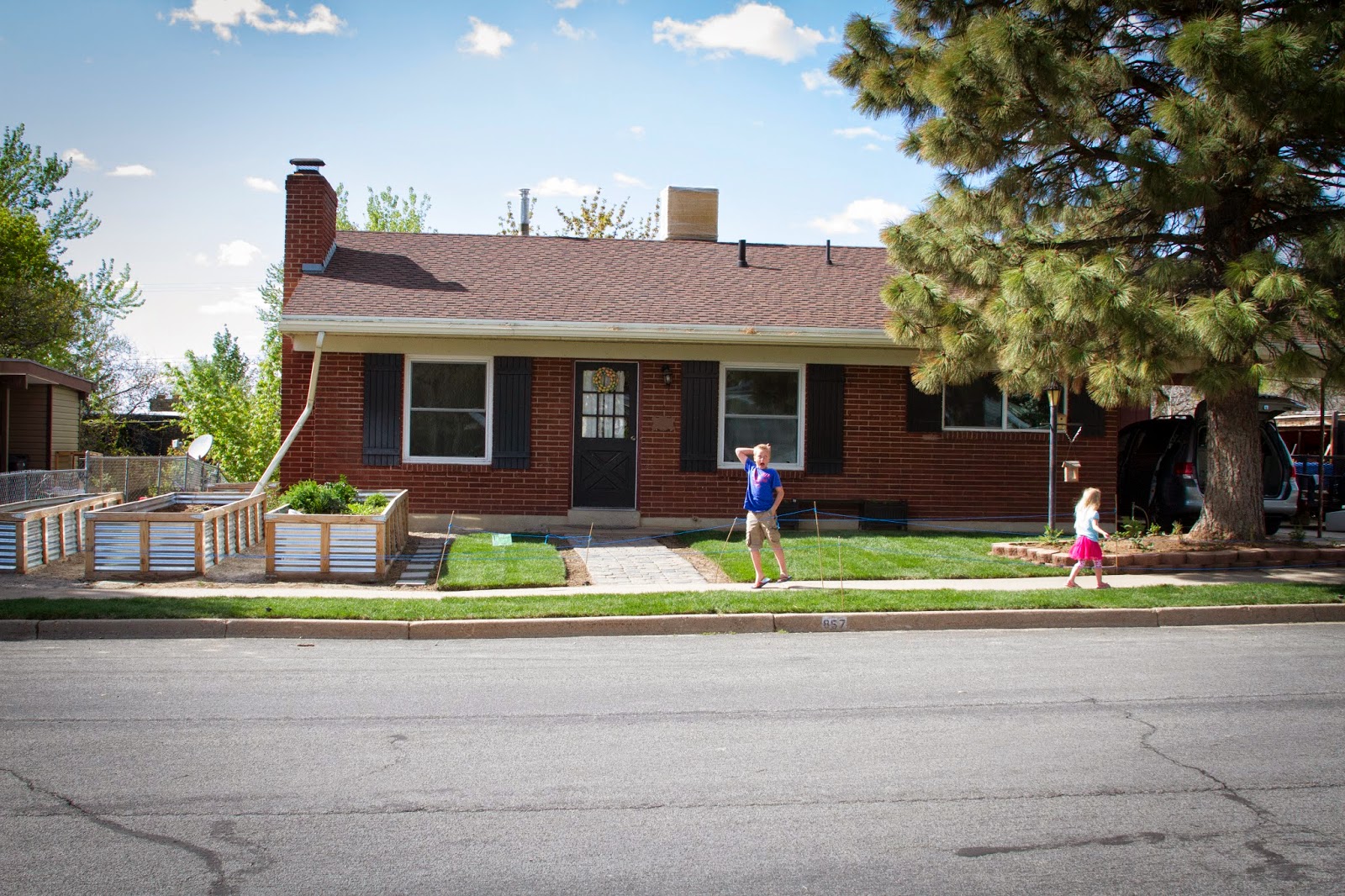 So much better! My house stays a lot cleaner and I am loving the view out my window. Hard work over many years, that really has paid off!
Posted by Tiffany at 7:01 AM