When you have four babies in four years, and then there is a four year gap before you have another—things get forgotten. I was so on my game when I had the twins. I had this baby thing down. After all, I had just had two singletons (twin mom speak for just one baby) in quick succession. I knew the ins and outs of baby sleeping, baby feeding, baby wearing, nursing, tummy time, and baby gear. I could have written a book. Except that even from the time I had my oldest in 2006 to the time I had the twins in 2010, a few things had changed.
This time around I decided to throw away the how to books, delete the baby center searches, and just trust my gut. It was the advice I gave “new moms” at baby showers, and the only thing I really think I have learned so far about parenting (besides that I don’t know anything about parenting.) 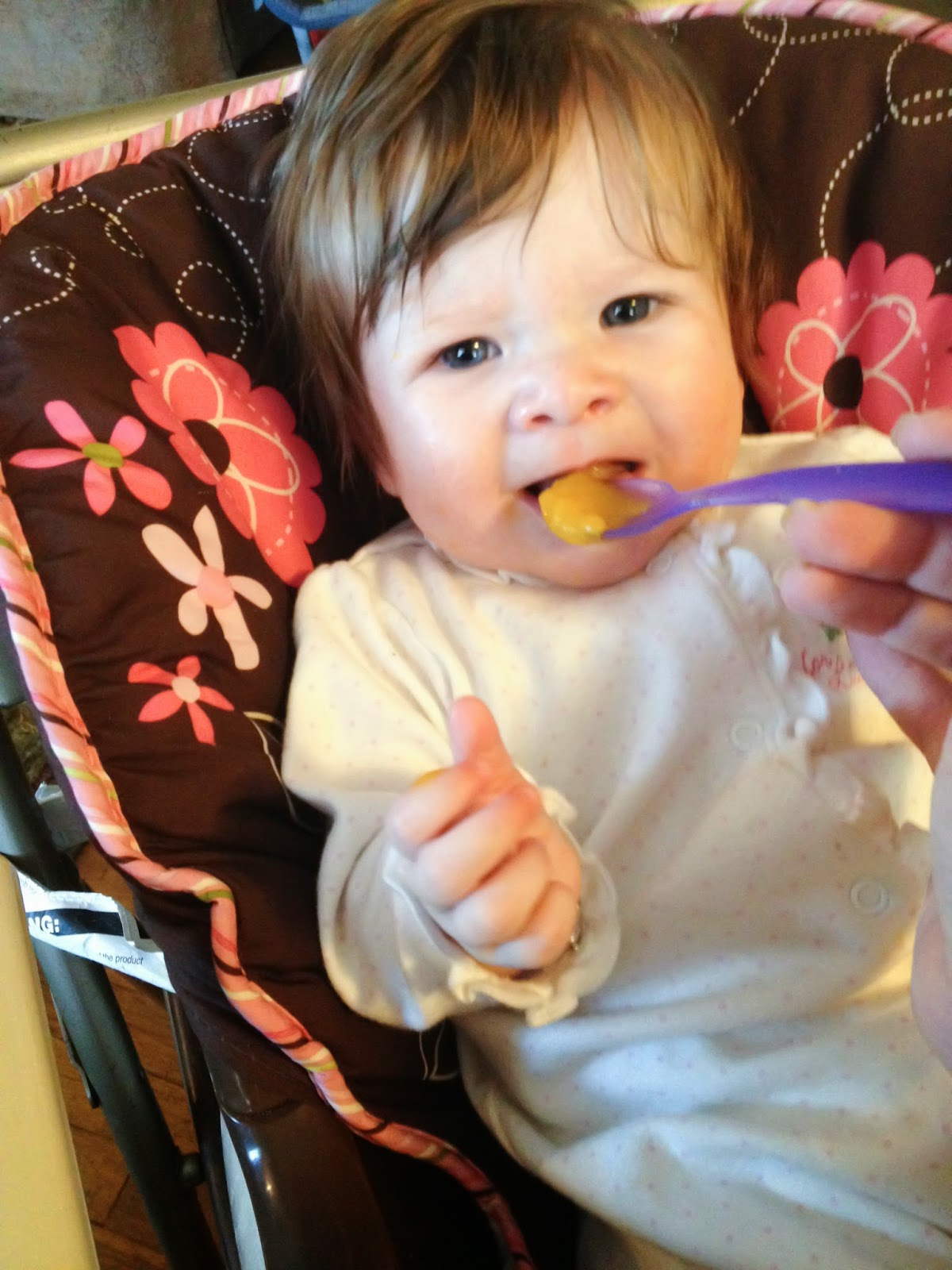 So Monday, I was FINALLY processing a couple pumpkins that I had sitting around since fall. I roasted the pumpkin seeds, baked, and pureed the pumpkin.  Abi was sitting in her high chair, just taking in the business of the day. As she started fussing while I was pureeing a batch of baked pumpkin, I looked at her and wondered if she wanted some. “It is just squash after all” I said to myself. “I haven’t given her food yet, but she is five and a half months old” came my next thought. “I’m pretty sure that I gave my other kids rice cereal by five months and this has got to be better for her than rice cereal!” So I put a tablespoon in a bowl, grabbed a baby spoon and sat down with her.
Abi was LOVING it! 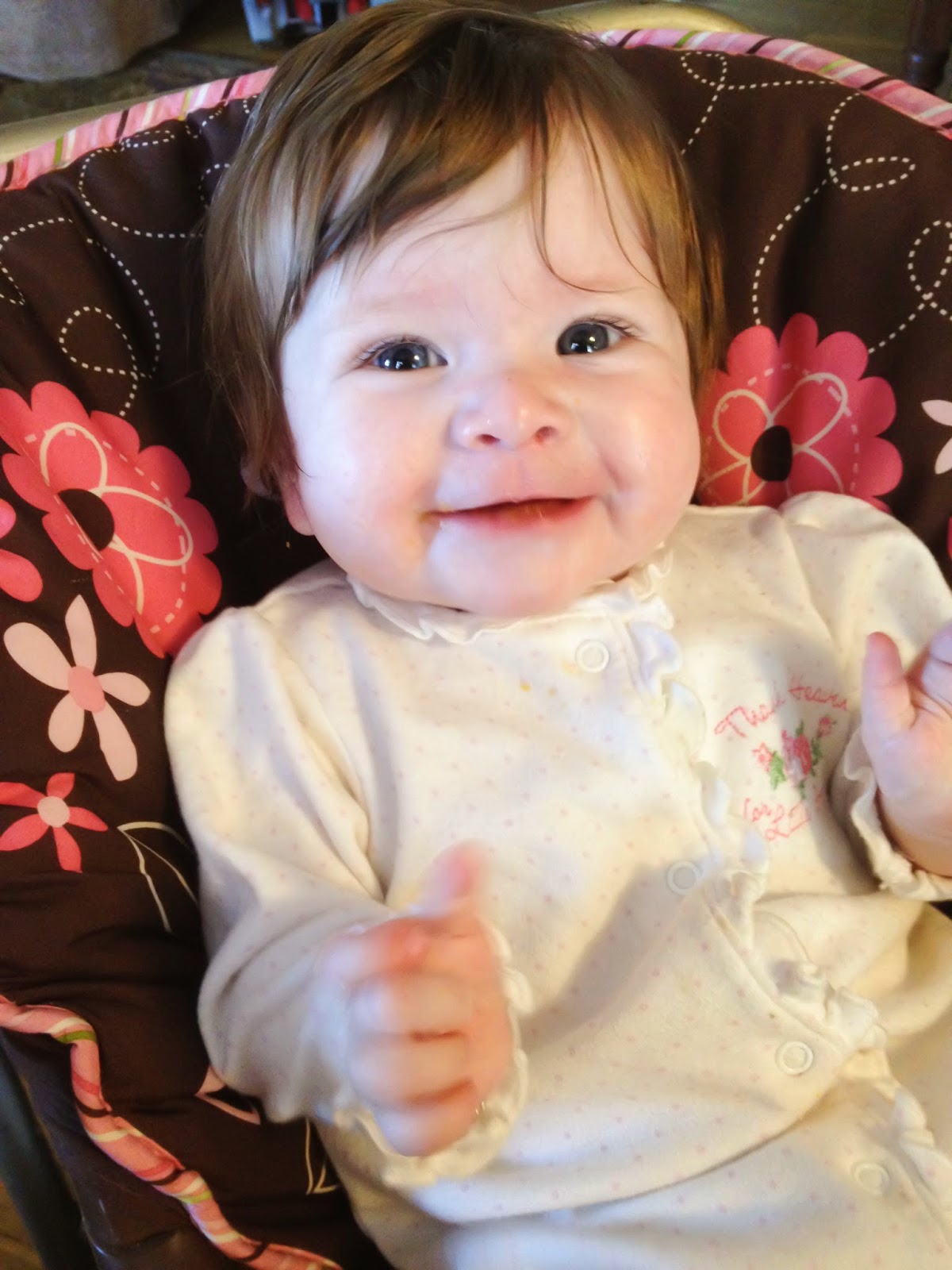 She was such a good eater. “I really have forgotten so much about the steps of babyhood.” I told her as she squished the orange goop back out at me between her gums. “I sometimes feel like a first time mom—only this time I just don’t care!”
After Abi finished her pumpkin she graced me with a ten minute nap, so I decided to nab a shower before my husband got home. As I was showering, I was basking in the fact that I had gone rouge in the motherhood department. I didn’t plan and anticipate her first feeding. I didn’t look up what the best food to start with was. I didn’t even look at what I could and couldn’t feed her. As I was fishing pumpkin seeds out of my teeth the horrible thought struck me—wait, aren’t there forbidden foods? Things that if I give them to my daughter before a year can seriously hurt her or cause major allergies?
I hurried out of the shower, grabbed my phone and instantly went to baby center.

Luckily, since my first children, they have taken most foods off of the forbidden-before-a-year-list and are actually encouraging you to give your child things like honey, eggs, and strawberries. Relief washed over me and peace exchanged panic in my mind. I didn’t kill my baby—and she loves pureed pumpkins.

And that is the story of the one time I tried to go rouge as a parent.
Posted by Tiffany at 4:43 PM