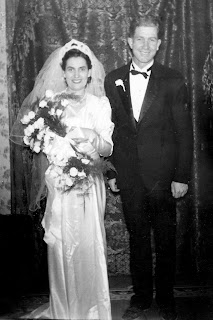 Another picture that was influential in my life was the picture that grandma and grandpa displayed of their wedding day. It always reminded me that we were an eternal family. I knew that because my grandparents were sealed in the temple that we would always be together. It always gave me a reason to do my best, to be part of our large eternal family.
The most recent memory I have of Grandma and Grandpa Anderson was November 29, 2008. They both had passed away by this time. That was the day that I was sealed for time and all eternity to my sweetheart, and my two little boys. There were so many of our friends and family there with us. As I looked around and saw the faces of those I loved, my spirit felt the presence of those whom could not be seen. My grandparent’s presence was so strong—I could tell you exactly where they were standing.
Through this and other experiences—I know families are forever. I am so glad that I have such amazing grandparents. Their legacy will live on. I enjoy telling my children about my grandparents. They have left us with so much to aspire to. I pray I can do just that.
Posted by Tiffany at 3:07 AM