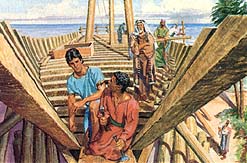 I absolutely love my calling in the church right now. I get to teach sunbeams. Not only do I teach the cutest and most reverent children in all of Jr. primary (with the exception of my handsome Turner a few classes back), but I also get to teach with one of the greatest women in all the world. I have to admit, I use to think that I knew a thing or two about children, until I taught with my dear co-teacher. Not only does Sister Hansen (or Sister Handsome, as Max calls her) know a lot about teaching the little ones, her actions match her knowledge—something I am constantly trying to do.
Sunday Max was lucky enough to get to say the scripture in opening exercises. The scripture is 1Nephi 3:7. He did a great job, even if the whole primary was talking at the same time. I enjoyed practicing it with him this week. I love Nephi and his stories! We are also learning the Song Nephi’s courage. I love the song Nephi’s courage. For those of you whom may not be familiar with it, it is a song that recounts a few events in the ancient prophet, Nephi’s life. The chorus is the paraphrased aforementioned scripture 1Nephi 3:7 “. . . I will go and do the things which the Lord hath commanded, for I know that the Lord giveth no commandments unto the children of men, save he shall prepare a way for them that they may accomplish the thing which he commandeth them.” The chorus words actually are: “I will go, I will do the things the Lord command. I know the Lord provides a way, he wants me to obey.”
Just writing the words warms my heart!! The story of Nephi is so inspirational. Nephi was commanded to do many things, one of them being building a boat! This account is found in 1Nephi chapter 17. So I can only imagine how this happened—Nephi has a strong impression/inspiration/spiritual prompting to go pray in the Mountains. As he is praying he gets the impression he needs to build a boat. This is in a day and age where he can’t just google “How to build a boat.” He wasn’t a boat maker—he had NO IDEA what he was doing. He received the commandment to build a boat, and what was the first thing he asked God? Not: “me?” Not: “You want me to cross this ocean? In a boat I built?” He asked where he should go to get the metal to make the tools he would need.
Nephi gives us a clue as to why he felt like he could do this. In an earlier verse in the same chapter, he states: “And thus we see that the commandments of God must be fulfilled. And if it so be that the children of men keep the commandments of God he doth nourish them, and strengthen them, and provide means whereby they can accomplish the thing which he has commanded them. . .” He testified that God will nourish us, strengthen us, and provide the means whereby we can accomplish the thing which God has commanded us.
That is the best part—this isn’t about the 10 commandment, it isn’t about living the Law of Moses or the beatitudes, these were individual commandments that God had for Nephi and his family. The Lord has individual plans for us. The things that we are called to do on this earth are individual commandments for us! We are not all commanded to build a ship or take our family into the wilderness. Yet, just like Nephi, we all have individual commandments. What are yours? What has the Lord put you on this earth to accomplish?
There are several commandments that I feel the Lord has given me. I need to pray for Nephi’s courage. I logically know that God will sustain me the same way he sustained Nephi. Do you think that Nephi was worried when he pushed that boat out on the sea? Or do you think he had all the confidence that he followed God’s command with exactness? Do you think he ever wondered why he was building a boat when they were living in a beautiful land with a lot of fruit and honey?
How is it that people come across their life mission? I read biographies or short bios of very successful people. Some of them have known since they were a youth what they wanted to do with their life. As a youth, when people asked me what I was into—the answers were always the same “1.Children, 2. Photography, 3. Sign language.” Does that mean that these are my life mission? Although I know that being a mother is part of my personal commandments, I feel that every mother also has their own personal mark to make upon this earth. I hate to say that we have more to offer, because that sounds like mothering isn’t enough. Mothering is the greatest thing we can do, but I feel like we all have something else (even something less) to offer this world.
What have you done to discover your life mission? How do you go forward in faith with that plan?
Posted by Tiffany at 7:00 AM